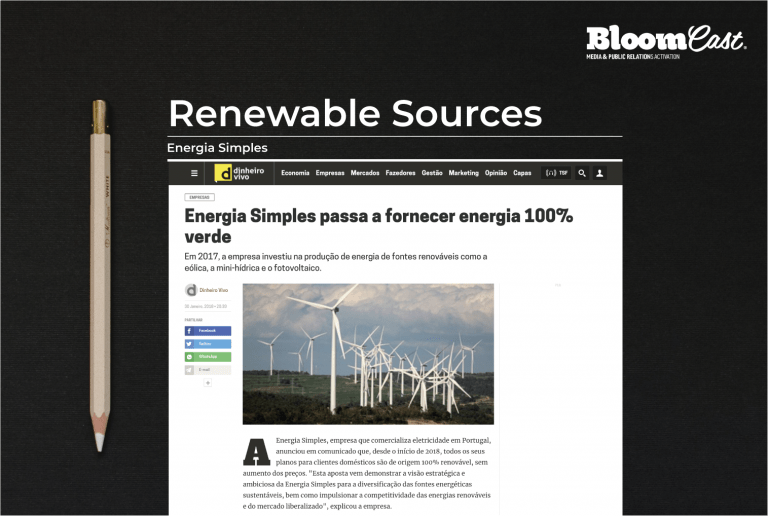 Energia Simples is a brand owned by PH Energia, Lda. to operate on the liberalized electricity market. Based on Oporto, Energia Simples was founded in November 2014 by renowned professionals with know-how in the energy, engineering, and technology fields. They shared common concerns on energy efficiency, environmental sustainability, and business ethics.

The concerns are all mirrored in what they are, internally and externally. The company offers self-consumption solutions that produce 100% renewable energy. To reduce their ecological footprint, environmentally friendly measures are being enforced inside the Energia Simples, and the team has gone fully digital.

The company is strengthening its presence in the Portuguese market, communicating consistently and coherently, through impactful key messages.

Energia Simples is working with BloomCast since October 2016.

To strengthen the profile of Energia Simples, as well as place its CEO as an Opinion Leader in the Portuguese market, positioning them as a reference in the energy, innovation, and technology sectors.

To this end, it was and continues to be necessary to work on two fundamental axes: the importance of the liberalized market and sustainability, with the purchase of green energy.

The challenge was the need to create key messages that show the differentiation of Energia Simples in a competitive and little differentiated market. That was the main goal – communicating Energia Simples’ strategic vision in the ​​energy efficiency field and its knowledge of the sector, as well as its challenges, mentioning its unique selling points.

The workflow is based on interconnected and current topics, such as: renewable energies, sustainability, the importance of energy communities, electric vehicles, hydrogen, peer-to-peer. The NZEB buildings are also a huge challenge, as it is essential to be up to date and communicate according to current measures implemented by the government and the European Union.

Over the past few years, Energia Simples has invested heavily in the production of energy from renewable sources, ​​such as wind, mini-hydro and photovoltaic, having therefore installed more than eleven small-scale solar plants distributed all over the country, in a clear commitment to the future of this technology. It also invested in making all its Electricity Plans for private customers 100% renewable, without increasing costs.

This commitment shows the strategic and ambitious vision of Energia Simples for the diversification of sustainable energy sources, as well as boosting renewable energies ​​and the liberalized market.

The approach proposed involves the definition of messages to demonstrate Energia Simples’ differentiation in a sector where services are little differentiated in terms of the common user’s perception and where the idea of benefits is not fully clear.

In the beginning, it was also planned an event to present and make known the unique characteristics that differentiate the company, taking the opportunity to foster a goodwill relationship – the proposal was a breakfast meeting with key media outlets to Energia Simples. Over the years, several subjects have been communicated, from new partnerships that were established, one of which with Vitória de Guimarães, to public tenders that were won – such as Bank of Portugal, Douro Intermunicipal Community and for Guarda-, to the creation of the First Parque Solar no Mercado Livre, the pioneer project in Portugal, inteGRIDy, among others.

The expansion into the Spanish market to supply electricity was also a moment of huge media impact.

Through op-ed articles and interviews, Manuel Azevedo, CEO of Energia Simples, has been regularly voicing the company’s expertise in the energy sector, which allows to reinforce and consolidate the vision of Energia Simples as a leading company that follows the main technological trends. One of the actions was an editorial partnership with Vida Económica, a news outlet with a strong implementation in the northern region of Portugal, where Energia Simples has its greatest presence. The company’s CEO writes op-ed pieces regularly.

To strengthen the company’s identity, extensive relational work has also been carried out with the specialized news outlets, in order to position Manuel Azevedo as an Opinion Leader in this sector. Articles were published namely at Público, Expresso, Jornal de Negócios, Dinheiro Vivo, and Notícias ao Minuto.

“From an early stage, BloomCast has participated in the definition and implementation of an Energia Simples strategy for the media. Our growth has always been accompanied by the BloomCast team and expectations overcome with excellent results. As a long-term partner, it has a strong strategic sense that has allowed us, at every moment, to reach a wider audience with rigor and professionalism”, says Manuel Azevedo, CEO of Energia Simples.

Here, to see other Success Cases.